Tales From The Emerald Isle 2

''Tales from the Emerad Isle 2D special
The new issue of Emerald Isle was launched in Derry, and I now have copies for sale. No 2000ad characters this time around, this time we have Robots, Highwaymen, Fairies and more. The creators, who put in valiant efforts to get this out in time for the con in Derry really came up with the goods, they are as follows;

A Robot Walks into a Bar
Script, Art and Lettering James Newell 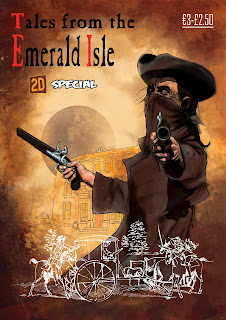 Posted by PullingPictures at 1:31 PM