I got a call out of the blue asking if I'd be interested in this job after the client had searched a few sites and were impressed with what they saw on mine-- a picture of a hammer...

After meeting with the client all became clear. Their concept was all worked out- a wooden crate almost bursting as the contents tried to get out. For this they decided they needed;

The original idea was to have the crate suspended on a chain, with additional chains wrapped around it.

I did a quick rough 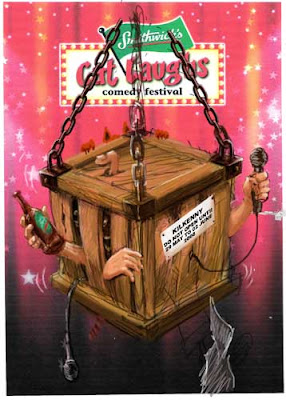 The idea was that the festival itself is escaping from the crate. So I had to think what can I show to represent stand-up comics? What indeed? It's a profession that uses few props- clown shoes etc were a no-no ( "too evil" said the client, revealing perhaps a little insight into his psyche). I settled on microphones and...other microphones. The pages of script were abandoned. We quickly decided that suspending the cage this way would get in the way of the logo so I decided to place the crate on the stage. I was also concerned that the whole thing had a bit of a 'Deerhunter' soldiers in a cage vibe. The beer bottle also had to go.

So with the crate now on the stage I reworked the crate to look less frightening and added a few more limbs.

This approach got the go-ahead 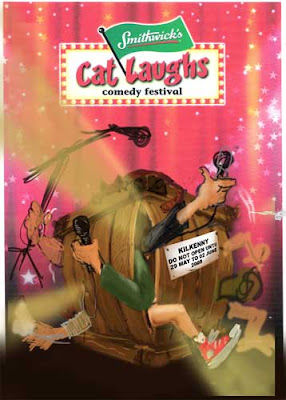 I tidied it up a bit and added cool medieval metal hinges... 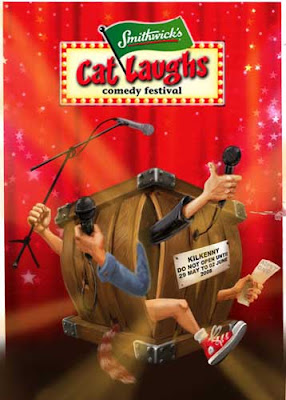 Which I immediately had to remove(too medieval). The cat seemed a bit too distracted from the proceedings so we tried getting him involved.. 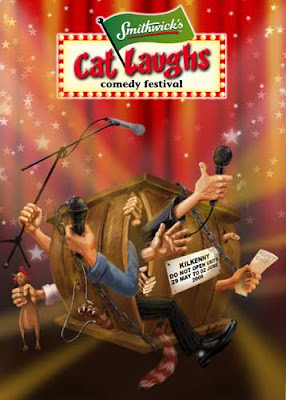 There he is, slashing at the microphone lead. As it turns out this was deemed a bit too vicious looking. I also added the chains idea- and promptly deleted them again (hooray for photoshop layers). My stroke of genius here is the addtion of that universal symbol for "funny"- the rubber chicken.

Alas, this too got removed..strict guidelines regarding... 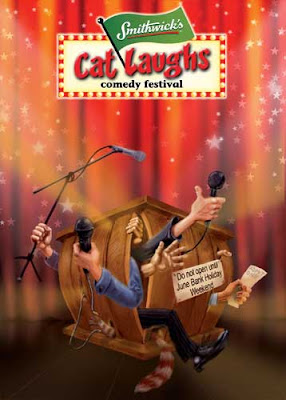 So there you have it. A little bit of resizing and it was done.

I really enjoyed this job and working with the guys.

The festival is happening in Kilkenny in June

This was painted in Photoshop CS3 using a Wacom intuos III
Posted by PullingPictures at 6:19 AM